I am trying to understand my surroundings and open a new window to see a new world. I would like to establish a link between art, ecological education and the order of the universe. I have always been interested in making bridges between ancient symbols and new media, folk art and intellectual art. I want to take intellectual art to the areas where ordinary people live. On the other hand, i am interested in bringing the existing values from the culture of folk art to the art centers where intellectual art is practiced. I love to take an issue which is local and make it global. today environmental crises can be seen in our villages and in global village.
Art is not only an individual action, but rather it can be a dialogue of past peoples with us, our dialogue with people in the present time, and also with people in the future. We take something from one group and pass it on to others. I find there can be a positive result when a community collaborates in a project of this kind. It provides a wealth of experience that goes beyond the personal.
I use diverse media such as photography, text, video and video installations to promote my works. The capabilities of new media and presentation of art works in the virtual and online environment in the digital age provide a platform to promote them in a global scale for international audiences beyond the village where I live. In addition, I believe that a website is not only a place to introduce my work, but a contemporary media of conveying my ideas and art.

Subscribe to my newsletter and be always up to date!

A number of books, catalogues, and magazines of contemporary art include Nadalian’s works. He has been introduced as one of the world’s leading environmental artists by Edward Lucie-Smith in his book Art Tomorrow.

About Nadalian works he say:  Various symbols are incised on boulders- chiefly fish, which for the artist are emblems of the human soul, thirsty to experience life, but also human figures, emblems of hands and feet, and images of birds, goats, snakes and crabs. While some of these engravings are on a large scale, others are carved on small pebbles, and are left for casual visitors to find. Nadalian regards the discoveries these visitors make as acts of collaboration with the artist. Edward Lucie-Smith

John K. Grande in his book Dialogue in Diversity  focused on Land artists and introduced Nadalian and says: “Nadalian is an Iranian sculptor whose life’s work involves engendering respect for living creatures and the natural environment. To achieve this, besides living with nature himself, he established sculpture grounds in a peaceful environment in natural surroundings. Water is a living element that contributes to his sculptures, and many of the symbols he engraves and sculpts are derived from ancient mythology and the rituals of pre-Islamic civilizations.” John K. Grande.

Robert C. Morgan in a note about Nadalian says:  Ahmad Nadalian’s work is like a synaptical charge between the Paleolithic cave art and Ancient Persia.  He works with directly the earth, primarily in sand and stones on the shores or shallow pools of rivers, ponds, and streams…  French artist Yves Klein felt that art was somewhere between the ancient world and the future.  A similar statement could be made about Nadalian, except that his forms appear as simulacra of a pre-linguistic culture, in fact, as true signs reiterating something about our present moment. One of his titles is “The River Still Has Fish” – meaning that, in contrast to Paleolithic times, the threat of pollution is changing the rivers of the world in a way that is threatening to all species on Earth. One could say that Nadalian’s real studios are the rivers of the world…   Nadalian’s work is a kind of a combined Earth and Process art, at least in Western terms.  Yet he is also within the context of Postmodernism by returning us to an era when language did not exist other than as signs, an era when there were no urban monuments and no public art in city squares.  There was only the earth on which we trod and the satisfaction of knowing what had to be done each day. Landscape Architecture:  6/2008

Barbara Stieffdescribes Nadalian’s work as follow:  For the Persian artist Ahmad Nadalian, fish are symbols of human soul. They are thirsty for life.  Like a shaman in earlier times or a good pastor today, Nadlain wants to help people. He engraves the fish onto stones and then returns them to nature once again, where they can become vigorous and swim like fish in water.

As part of his art, Ahmad Nadalian buries his creations all around the world in holes in the ground.  People who observe him doing it may secretly want to retrieve the “treasure,” hoping to find gold and jewels.  But at the bottom of each hole there is a simple stone with a motif carved into it.  These stones are the treasure, though people often do not realize it. For the carved stones represent the artist’s ideas and good wishes for the whole earth. Earth, Sea, Sun, And Sky  Art in Nature

Sam Bower describes Nadalian’s work as follow:  By carving simple fish shapes and other forms onto small stones and river rocks, artist Ahmad Nadalian seeks to repopulate the spirit of neglected streams and rivers in his native Iran and around the world and share these treasures with future generations. Over the past decade the artist has traveled to cities and remote regions in every continent (with the exception of Antarctica) to work with children and local residents to create countless treasures which are then tossed into rivers and buried under the earth, spreading his message on a scale that few artists have before. Nadalian’s “message to contemporary man is to remain aware of the dangers of environmental disasters and political crises. If there is any audiences in the future, this work will tell them the story of life and humanity.”…  ” The universality of Nadalian’s stone images and their ties to his Persian heritage, are part of their appeal. As natural images with deep historical roots they are both recognizable and enigmatic. For the artist, “walking along a riverbank and washing the stones, which he has already carved, is not only a performance, but also a prayer, a form of worship, an invocation…

Coming from a land as rich in history as it is in turmoil, the artist’s perspective of the future of our planet is rather bleak: “Global warming, pollution, wars and crises across the world may terminate life of most of living creatures including human beings.” Art, for Ahmad Nadalian, is a blessing and a connection to time and place, and his “only concern is that humanity, at present or in the future, may be less in harmony with the past, and with the earth and heavens.” Green Museum 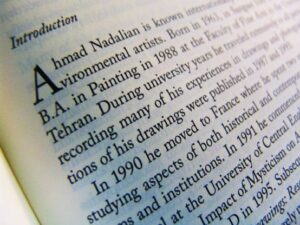 An Interview with Ahmad Nadalian: In the Search of Lost Paradise 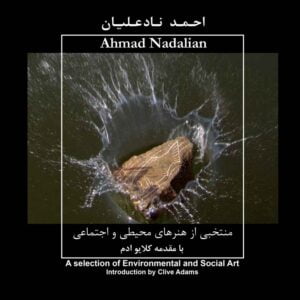 This book introduces a selection of Ahmad Nadalian’s environmental and social art. The recent works [...] 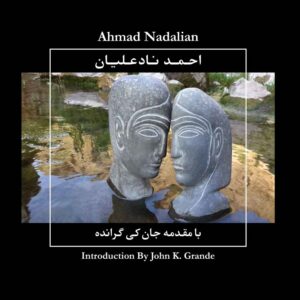 Ahmad Nadalian: Book of Art Works with an introduction of John K. Grande

This book is the most comprehensive collection that introduces the works of Ahmad Nadalian since [...]