Thanks go to my international friends Barbara Roux and Abigail Doan from the USA, Sibyll Kalff from Germany, who support us, share their experience and sent their designs.  Works by Eric Van Hove and Richard Thomas inspired us to create typography and pattern in nature.  British artist Benjamin Hewett, who is now in Iran, joined involved collaborative art projects with us.

Most Photos by Raheleh Zomorodinia

This festival had no sponsor.  The young artists paid for the cost of their trip, food, and supplies they needed to create their art works.

Acording to  http://en.wikipedia.org  The cost of one of the wars to the United States was calculated by the United States Congress to be $61.1 billion. About $52 billion of that amount was paid by different countries around the world.

But the cost of these wars is not only money.  Many innocent people lost their life.

During the festival the artists who presented in Hormoz Island used stones and wrote this statement: “PEACE IN THE PERSIAN GULF”.  We used Google Earth and chose the location of this works. We hope when Google updates its pictorial map, people around the world can read and see our wish.

During the three last decades we always witnessed wars in the Middle East. In 1981 Iraq with the leadership of Saddam Houssen attacked my country.  During the war Sadam Hussein’s army used chemical weapon against Iranian and his own people in cities such as Halabja. This war resulted in hundreds of thousands of deaths and casualties.

Then in 1991 his army attacked Kuwait which followed a war. The Persian Gulf War (2 August 1990 – 28 February 1991) was a conflict between Iraq and a coalition force from 34 nations authorized by the United Nations (UN) and led primarily by the United States in order to liberate Kuwait.  Finally in 2003 USA and its allies attacked Iraq.

It is hard to believe that Americans and their western allies can establish democracy through war.  It seems that these wars are more related to oil. Geo-strategically, the narrow and shallow Strait of Hormuz is a global checkpoint.” Oil tankers of this region must pass through the Strait.   We chose Hormoz Island in the Persian Gulf, because the Strait of Hormuz in Persian Gulf is a gate for all armies and navies who transported war equipment.

Dream of Peace in Persian Gulf:

The location of work in Google Earth

The war is going on and usually innocent people pay the price.  During these wars million of innocent people lost their lives. As a result of the militarization of the Persian Gulf we witnessed the death and suffering of millions of human beings and loss of living creatures.

An example took place on Sunday July 3, 1988, Iran Air Flight 655 (IR655) which was a commercial flight operated by from Bandar Abbas, Iran to Dubai.  The aircraft flying IR655 was shot down by the U.S. Navy guided missile cruiser USS Vincennes between Bandar Abbas and Dubai, killing all 290 passengers and crew aboard, including 38 non-Iranians and 66 children, 8 of them less than 2 years old. The Vincennes was inside Iranian territorial waters at the time of the shoot-down.  According to the U.S. government, the Iranian aircraft was mistakenly identified as an attacking military fighter. Unfurtunetly the United States government however has, to date, never officially apologized to the Iranian People.

This is only one example which shows ordinary people pay the price of war. One of the collaborative projects show a reference to this tragedy.  The artists through collaborative projects designed the airplane on the southern coast.  The outline drawings emphasized by the red earth of Homoz.  With the flow of water the design washed and many artist who were located on different locations saw and recorded the process of the vanishing airplane.  The impression of red earth against dark blue revealed the tragedy of war in the Persian Gulf.    Finally only this number was left, “Iran “IR 655”.

The red colour is pure earth from the same area 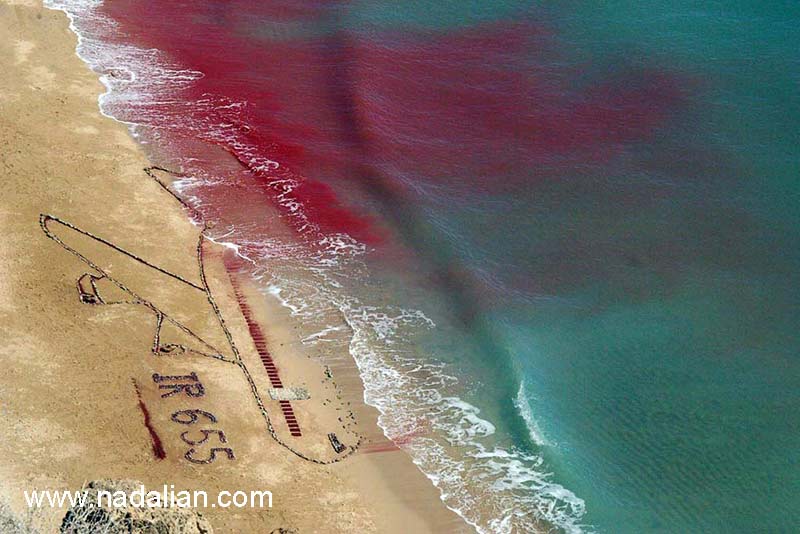 My other American friends Abigail Doan who professionally creates environmental art suggested and sent a design of two swallows. I used local red earth to paint her suggested design on the rock of Hormoz.
British environmental artist and sculpture Benjamin Huutt who is now in Iran himself presented in our festival and carved the evil of war on the rock.  He also helped young artists to design text in large scale.
In many occasions, mostly during the night, we had performances and dances related to local ritual.

A design suggested by my American artist friend, Abigail Doan.  I used local red earth pigment to paint her ‘swallows’ image on the rocks of Hormoz.

For me, the idea of having international artists participate or contribute is very important and symbolically could show the willingness and desire of world nations to work together towards peace.

For the occasion of this festival, my American friend Barbara Roux sent her new poem.  I suggested printing her poem on paper and role them, put them inside of plastic bottles available on the coast and leave them in the water of the sea.

For the occasion of this festival she also sent her new poem as follows:
Escape of the Flower Bird

Many days the small bird flew,
mute from the shock of the noise
and smell of fire.
His shadow caste a dark image
of planes of war.
Weak and hungry, he eyed
a field below and a carpet
of blue flowers.
At the edge of the field
he took refuge in a wood.
Here under cover of trees
he found his place to sleep
and dream of the fragrance
of peace.
Barbara Roux 2007

She presented this poem for the first time.  I suggested printing her poem on paper and role them, put them inside of plastic bottles available on the coast and leave them in the water of the sea.

Through collaboration, the students assisted me to copy and prepare. Young artists, Mithra Soltani and Hesam Al din Mohamadian left the bottles, which contained Roux’s poem in the water of the Persian Gulf. Maybe one day people can find and feel our common dream.

In the old times this tradition – releasing a message in bottle was a way of asking for help. For us symbolism is a media to react against war and express our dream of peace as obviously can be seen in Barbara Roux’s poem.  In any case, ordinary and innocent people should not pay the price of war.

We didn’t take these plastic bottles to nature. We collected them by the beach. We change this garbage to a conceptual art object.