The 4th festivals has been held  from  20th to  30th August when we receive German environmental artist Nadin Reschke Kindlimannm, Daniel Kindlimann and Ruud Matthes. They created art works in collaboration of local communities in Polour.

Her Project titled  [so far so good- so weit so gut]

>So far so good< is a travel project that deals with the idea of transforming public space temporarily into private or >home< space.

A tent construction designed and sewed of parachuting silk builds a portable home while travelling, as it is easy to carry and yet ideal for creating a personal and intimate space.

The 4th Festival Celebrating the Creation and Exhibition of Art in Nature was held in summer 2005.  The first resident artist this summer was Mr. Ruud Matthes, a Dutch artist who lives in Greece.  Between the 9th and the 22nd of July, he lived and performed his art in the nature of Iran.

The tent is one of the oldest forms of transportable accommodation and in times of globalisation and the urgent need for mobility it creates a “perfect” home. The tent is mobile which means it can be pitched or be packed up wherever needed and so create a space for meeting and contact or retreat. The artist aims to transfer public spaces into something new for a temporary time. The project rises questions about nomadic lifestyle and the process of transition an cultural identity. It supports the idea of trans-culture rather than concepts of multi-culture or globalization which are trying to overemphasize or diminish the cultural differences apparent on the globe. 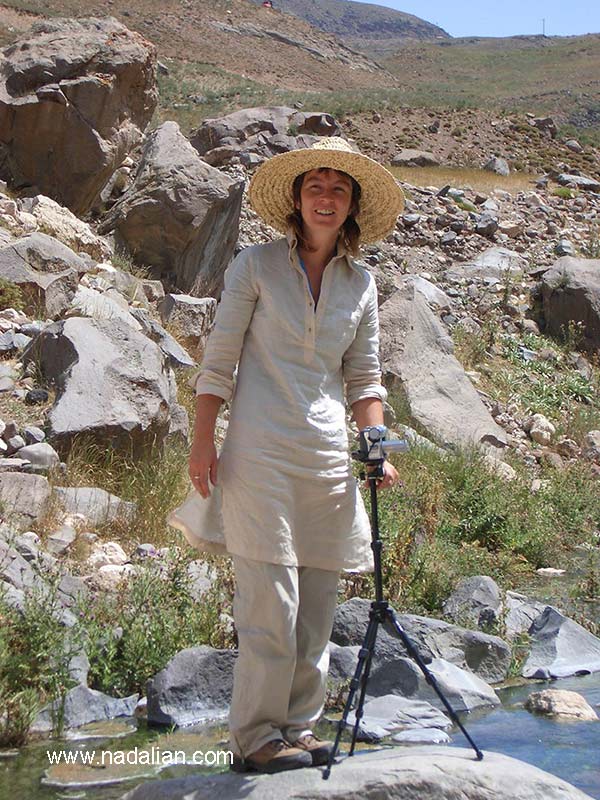 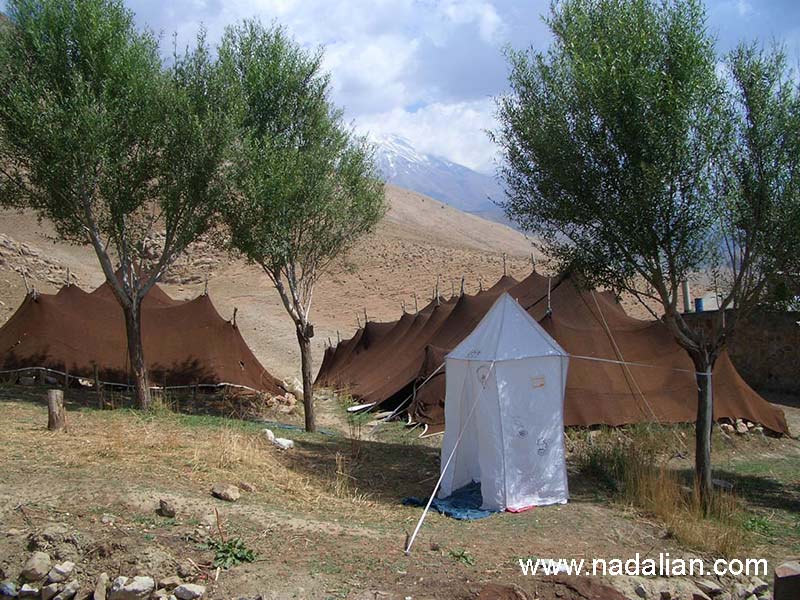 Nadin Reschke-Kindlimann uses the tent silk as a sketch book – embroidering her notions and observations about the different cultures onto the surface. The thread therefore functions like a pen and the cloth becomes a three-dimensional image area. With time more and more embroideries will cover the area and create a complex almost abstract pattern. Cognitively the images will interfere, cover and overlap over one another just like impressions and new experiences happen through the mind.

The artist chose embroidering because it evidently is a very female tradition connected with everyday life and can be found everywhere in the world. It was always called the >drawing with a needle< and developed over 2000 years ago in China where this project will eventually end. From China the refined handicraft was brought to India and from there spread over all of Europe. Since then embroidering has been a tradition of decorating but also of marking and characterizing space as ones own. Until the beginning of the 19th century it was the only socially accepted way for women to create imagery before they got entry into the patriarchal art system.

What fascinates the artists about embroidering is the process of permeating which creates a permeability of the cloth. The thread runs on both sides which means there is no inside and outside, no front and rear. It is a very slow, concentrated and focused process that creates a social atmosphere of straightforward nonverbal interaction. Therefore the process itself reaches people who are not involved in fine arts.

After the project has developed four months through Poland, Hungary, Romania and Turkey it takes place in Iran for three weeks, invited for a residency at the Paradise International Art Center in Polur.

The project so far developed through the following stations:

In Krzyzowa, a the International cultural centre in the south of Poland the tent got first inaugurated. Ten people, an international mixture of Polish, German and Russian met inside the tent to celebrate the opening of the construction with Polish wodka.

In Budapest the project got invited to stay in Dinamo, a non-profit Art Space situated in the 9th  District of Budapest. The working on the tent was accompanied with meetings and discussions with Hungarian artists. The residency in Budapest ended with a presentation of the project and a public art action, pitching the tent at Moskva ter, a very busy traffic junction, meeting place and street labour market in the centre of the city. Aim of this public intervention was to create a intimate and somewhat private space for meeting people in an public area and serve coffee inside the tent to invite passers-by. The action was stopped by the police.

In Romania the project followed the invitation by Monika Brandsch, a Romanian-German sociologist to cook an old traditional Romanian recipe: Coltinasi. The meal got served inside the tent and a lively discussion developed on the question of national and cultural identities.

In Istanbul the project got invited by the artists collective Oda Projesi to start a collaborative embroidering  on the tent with the local neighbourhood. Women from the surrounding Istanbul quarter joined the artist and the process was enriched by discussions about different ways of living in private and public space. 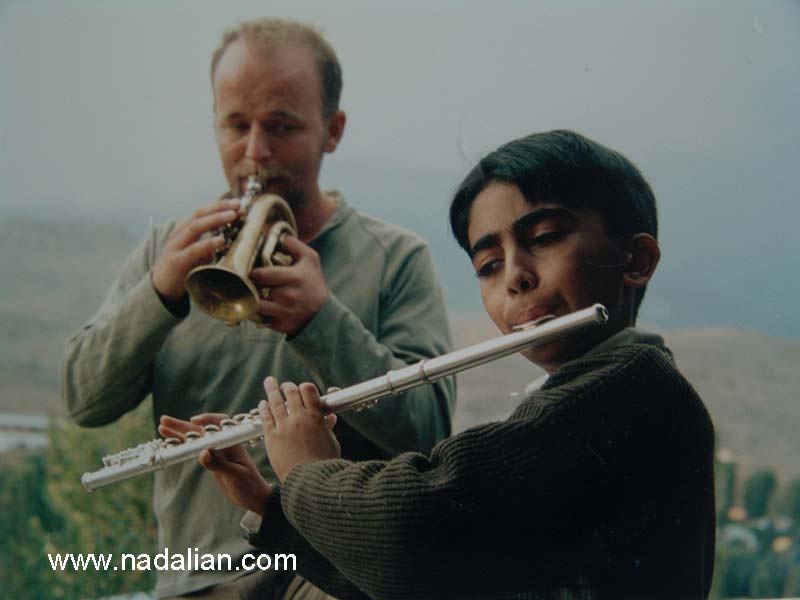 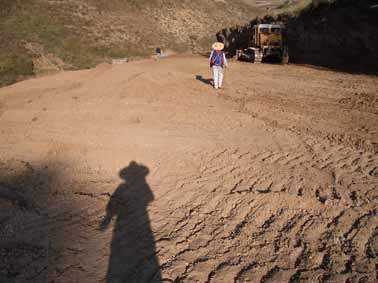 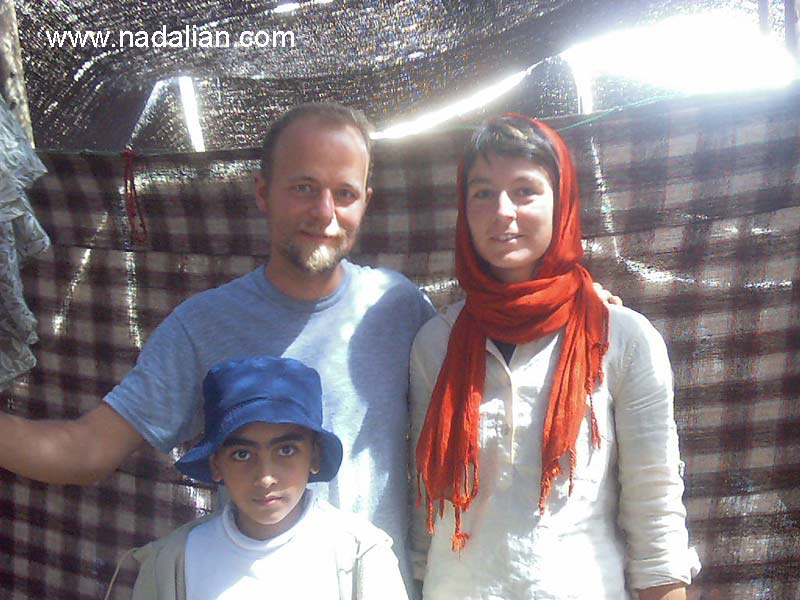 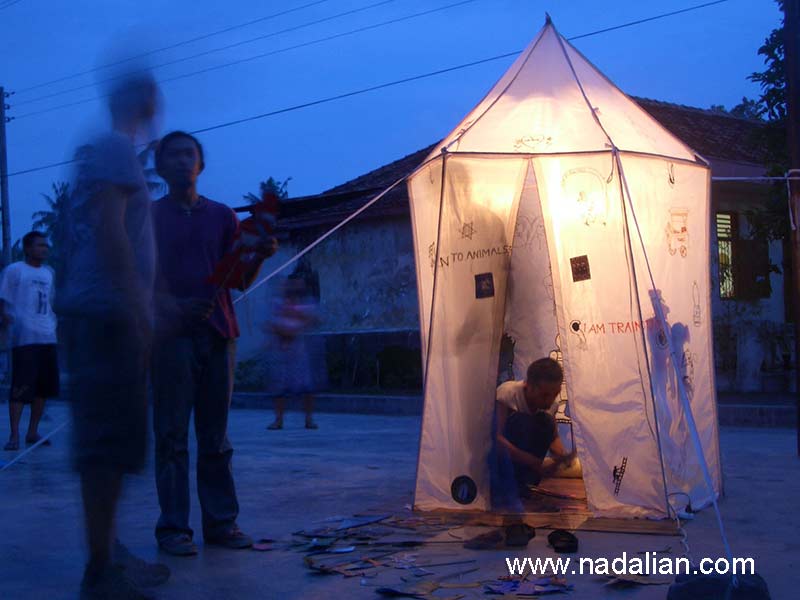 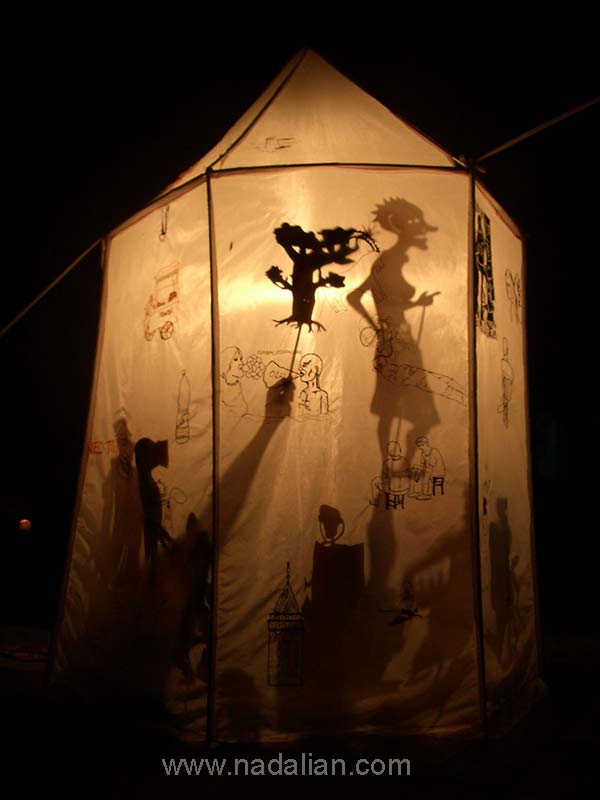 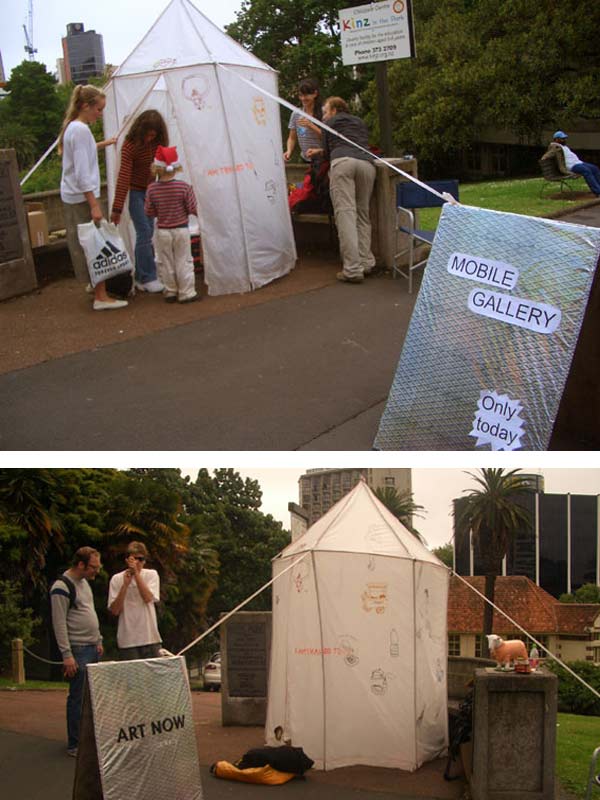 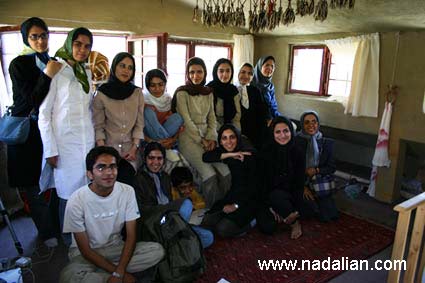 This installation was created by Ruud Matthes during his residency at the Paradise Art Center in Poloor, Iran , during the period July 9-22, 2005, with the help of the director of this center, Dr. Ahmad Nadalian, who also took the pictures.

This installation consists of feathers caught in frozen water being exposed to the heat of the sun, which melts the ice and liberates the feathers, now exposing them to the wind, which will blow them away.

Nature is the inspiration for most of the prints I make in those cases I depict what I have seen or experienced and print it on a piece of paper.

In this installation nature itself plays a basic role in the outcome of the creative process. I put the visual elements together and let nature do its work and watch it.

Change is a basic principle of nature. This installation wants to show two very simple processes of change:

But pressed to give my opinion I would say that this installation is about the necessity for change, for leaving one’s habitual position and to move and discover new places.

Watching my installation in reality, there was something added to the meaning of it. When I saw the feathers appear from the melting ice I realized that the ice could also be seen as protecting the feathers, giving them a secure position. Once the ice was gone the feathers looked vuluerable, anything could happen to them…. 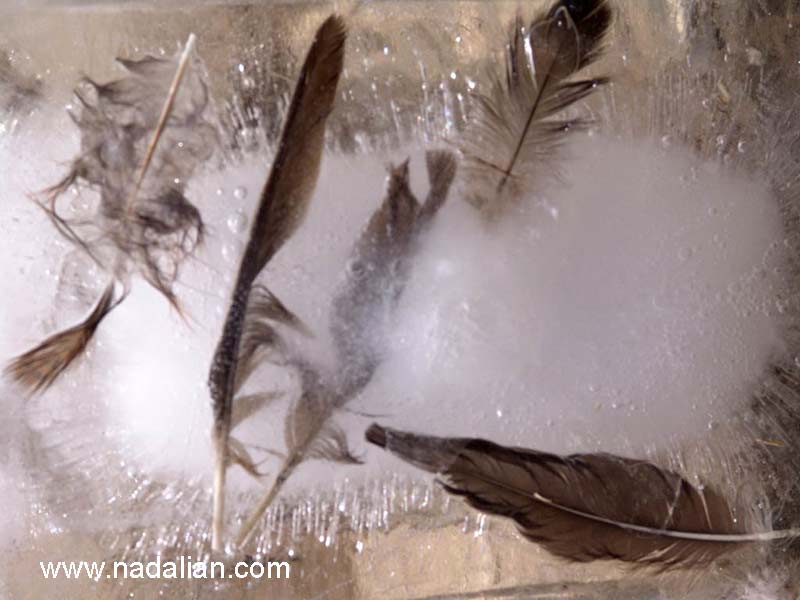 Installation ‘ Ice in the river’

This installation was created by Ruud Matthes during his residency at the Paradise Art Center in Poloor, Iran, during the period July 9-22, 2005, with the help of the director of this center Dr. Ahmad Nadalian, who also took the pictures.

In this installation I put a piece of ice in the river and let it melt completely. A simple process of transformation: ice becomes water, something solid becomes liquid and starts to move, taken away by the current of the river.

What is the meaning of this installation? I find that a difficult question, because I am not sure that for me it has only one meaning. So I think it is better to say that there is more than one interpretation possible.

In this way I also allow the viewer to have his or her own interpretation (I like art that gives me this freedom).

A process of change is the essence of this installation, I think thereby of a change of identity, a change from motionlessness to motion and a change of position (from isolation to being part of). 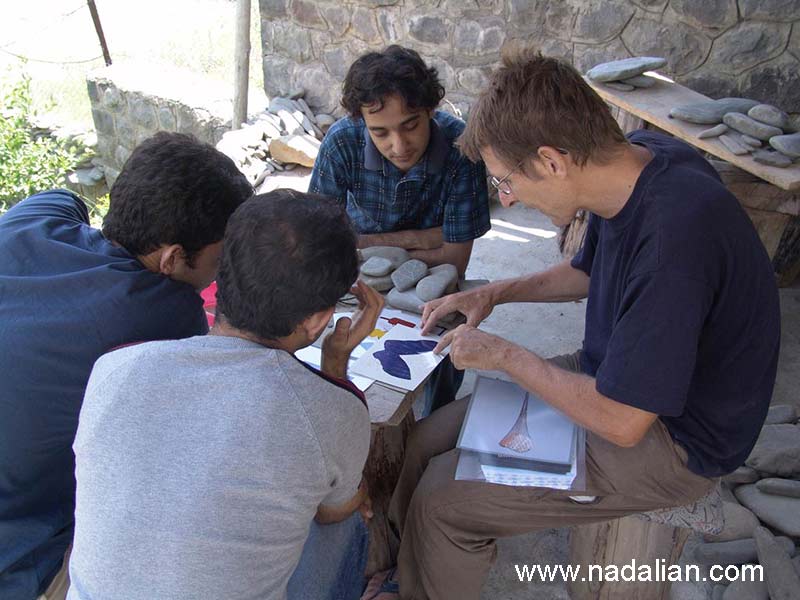 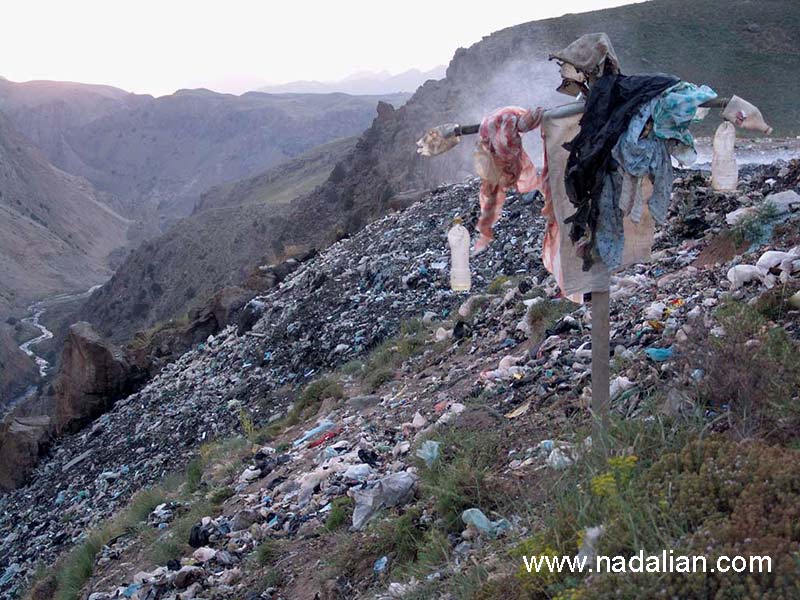 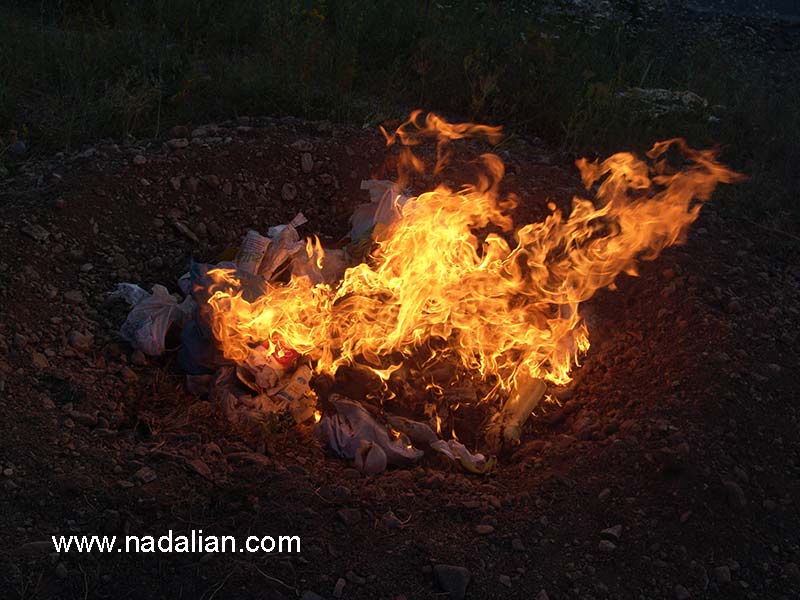